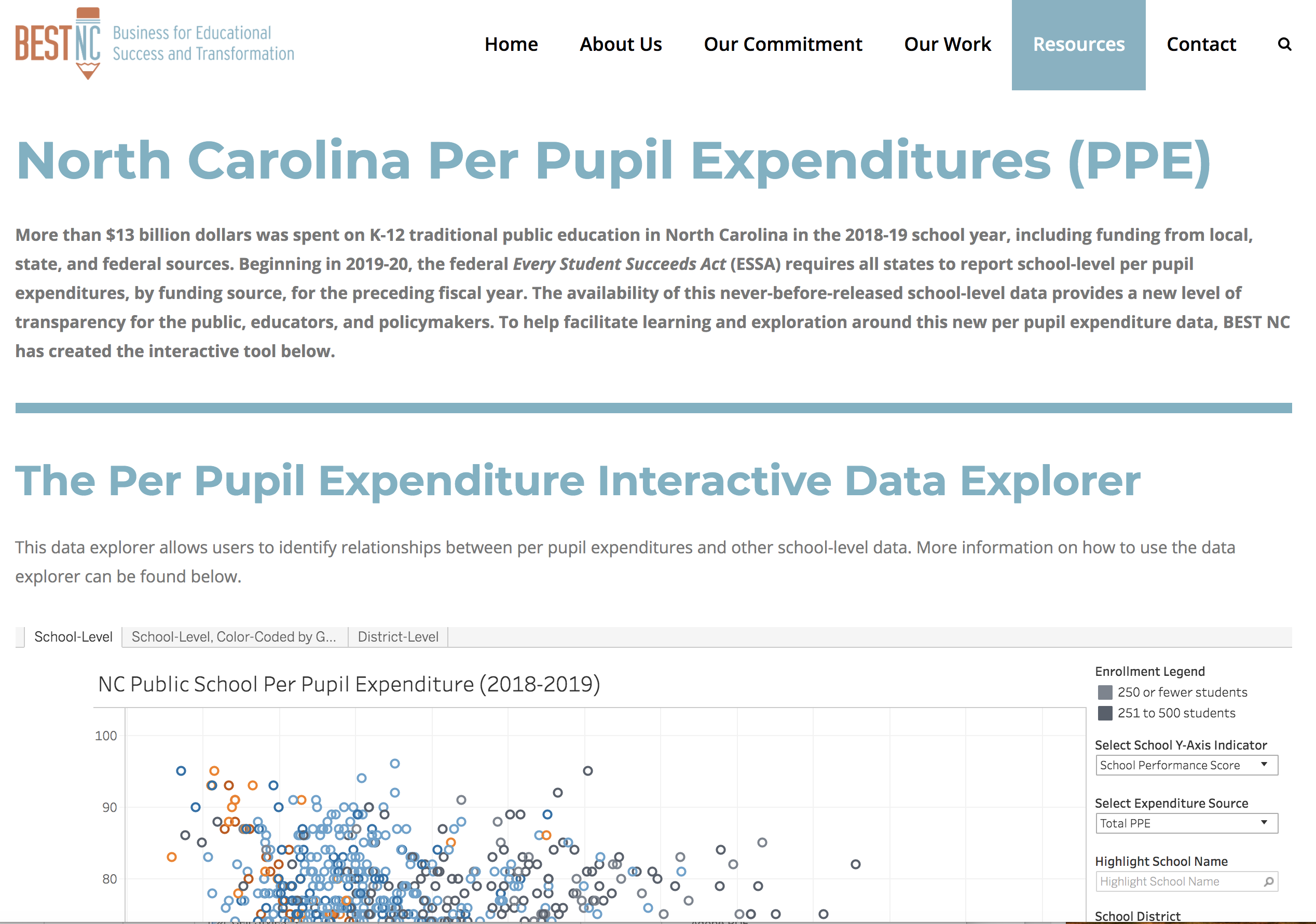 BEST NC is pleased to announce the launch of a new Per Pupil Expenditure (PPE) interactive tool and landing page designed to facilitate the understanding and exploration of North Carolina’s recently released school-level per pupil expenditure data and its relationship to other school and district-level data.

This web-based per pupil expenditure interactive data tool allows education stakeholders to explore per pupil funding trends across individual schools, within districts, and across districts in North Carolina. For the first time, educators, school leaders, parents, policymakers, advocates, and other members of the public can look at spending and performance for similar schools based on size, grade span, geographic locale, percent students with disabilities, and poverty.

By comparing like schools, individuals can identify potential best practices around the state and pinpoint opportunities for targeted intervention. For example, a school leader could look at similar schools across the state to find inspiring results that might help them curate best practices for their own school. Similarly, a district leader may look for spending trends in their district as compared with other districts.

The School-Level Per Pupil Expenditure (PPE) tool as well as summary analyses and additional resources can be accessed on the PPE landing page.

For the first time ever, North Carolinians can explore per pupil expenditures by school type, instead of being limited to district-level metrics. These data have allowed for new insights, which are highlighted on BEST NC’s School-Level Per Pupil Expenditure landing page, within the interactive PPE tool, and in our 2020 Facts & Figures guide. Some examples of these findings include:

As with any large data set, we encourage caution in making causal assumptions. This tool is intended to be a starting point for robust conversations about best practices, wise investments, and – most importantly – how to ensure student success.

In the months ahead, the impacts of the COVID-19 pandemic will be far-reaching for K-12 public schools, including the potential loss of funding due to decreased revenue. As state and district leaders consider adjustments to school spending, we encourage them to examine these data and look for inspiration and best practices from schools in our state that are succeeding with fewer resources and/or with higher populations of disadvantaged students.

BEST NC, in partnership with the Collaborative for Student Success and HCM Strategists, will host a series of webinars designed to help key audiences learn how to use this interactive tool. If you are interested in attending one of these sessions, please email info@BESTNC.org.

Also, additional data will be incorporated, and updates will be made to the tool over the next few weeks. If you have suggestions on how to improve this tool, please email using the address above.

BEST NC (Business for Education Success and Transformation in North Carolina) is a nonprofit, non-partisan coalition of more than 100 business leaders who are committed to improving North Carolina’s education system through policy and advocacy. Our vision is that every student in North Carolina will graduate with the knowledge, skills, and behaviors to succeed in a competitive global economy. Our mission is to unite an engaged and informed business perspective to dramatically transform and improve education in North Carolina.